“HARD ART VS. SOFT ART: the manifesto!” ­­ – S.A.M.
“Punk plunk dunk worldwide reporting with full-force scrapper graphics, this one comes out swinging.
...it’s the kinda zine that distracts you from the internet.” – E.F., Quimby’s Chicago
FINALLY, it’s here! This limited edition sporadical is bigger and badder than before. PERMANENT VACATION ISSUE 2 features new art and writing from 40-something contributors from all around the world responding to the theme of SIMULACRA...fake illnesses, folk-logos, faux glamour, Disneyland disasters, pop politics, spectacles, replicas,­­ fever dreams, alternate realities and other such things.
Come to ENJOY GALLERY in WELLINGTON on FRIDAY 24 AUGUST OR come to SAINT OMER in DUNEDIN on THURSDAY 30 AUGUST. The zine will be available for sale along with super secret surprise mystery guest performances. YOU DON’T WANT TO MISS THIS!
PERMANENT VACATION 2 will also be available for purchase directly from Kerry Ann Lee or from selected stockists in New Zealand, Australia, Asia, Europe and the US. For further enquiries please contact: kerryannlee@gmail.com.
This issue of PERMANENT VACATION is made possible through kind support from Creative New Zealand. 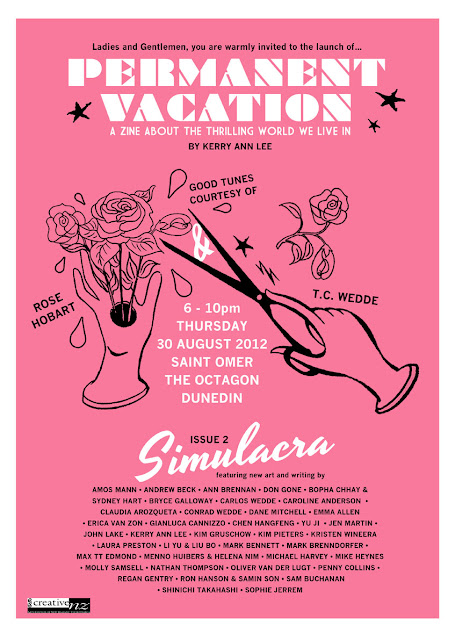 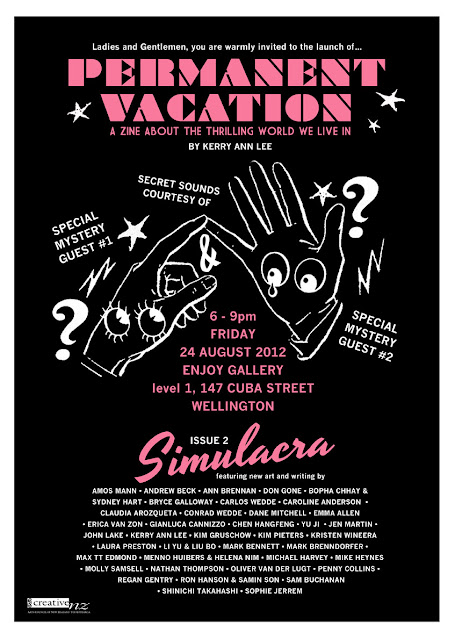 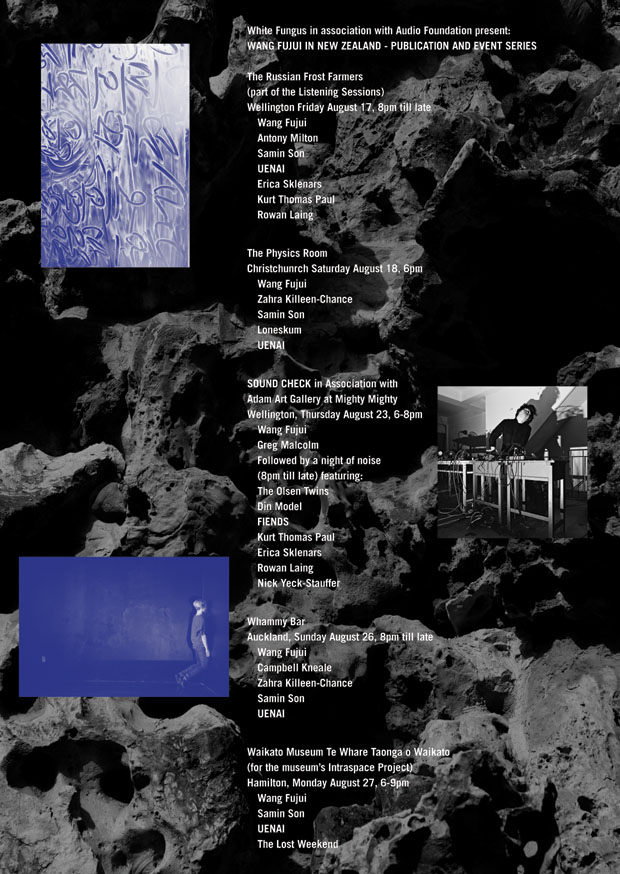 HAMILTON
MONDAY August 27, 6-9pm
Waikato Museum ≈ Te Whare Taonga o Waikato ≈
(For the museum's Intraspace Project)
Wang Fujui
Samin Son
UENAI
The Lost Weekend
-
-
White Fungus in association with Audio Foundation is bringing the Taipei sound / light installation artist Wang Fujui to New Zealand for a series of five events and an exhibition in Welllington, Christchurch, Auckland and Hamilton. White Fungus editor Ron Hanson will be appearing on Upbeat on Concert FM, Monday, July 30, 1pm to discuss the upcoming events and other White Fungus developments.
Wang Fujui is one of the pioneers of experimental music and digital art in Taiwan. In 1993, Fujui started noise, the first label and publication about experimental music in Taiwan. He has curated both the Taipei Digital Art Festival and Transonic. As well as performances, Fujui creates installations involving interactivity between sound and light. Fujui is the Head of the Trans-Sonic Lab in the Center for Art and Technology at Taipei National University of the Arts.
The event series will feature sound performances and temporary light installations by Wang Fujui, as well as performances by a number of New Zealand artists, including Campbell Kneale, Zahra Killeen-Chance, Greg Malcolm, Antony Milton, Samin Son, Din Model, FIENDS, Erica Sklenars, Nick Yeck-Stauffer, The Olsen Twins, Kurt Thomas Paul, Loneskum, UENAI, and Rowan Laing.
The interdisciplinary art events will involve music and a range of other media. Samin Son will be doing new performances in his on-going Toothpaste Action Series in which he draws upon his experiences in the Riot Squad of the Korean Military. Killeen-Chance will do performances in Christchurch and Auckland combining dance, video and sound. Sklenars and Thomas Paul will perform live video projections during the Wellington events. Kneale’s performance will be his first in Auckland in seven years. The events are kindly supported by Asia New Zealand Foundation.
To accompany the series, The Physics Room has commissioned White Fungus to produce a publication which will be distributed for free at each event. The Subconscious Restaurant, named after a restaurant White Fungus founders Ron Hanson and Mark Hanson frequent in Taipei, will feature an article about the history of Taiwanese electronic music by Jeph Lo, an article about the history of DIY culture in New Zealand by Bruce Russell, a piece about “contemporary values” by Hamish Win, and a new comic by Tim Bollinger.
The events will take place at The Russian Frost Farmers Gallery (part of the Listening Sessions) in Wellington, August 17; The Physics Room in Christchurch, August 18; Mighty Mighty (as part of Adam Art Gallery’s SOUND CHECK), in Wellington, August 23; Whammy Bar in Auckland, August 27; and Waikato Museum Te Whare Taonga o Waikato (for the museum’s Intraspace Project), in Hamilton, August 28. The Physics Room will also host a one-week exhibition by Fujui who will create a light installation responding to the Physics Room’s temporary location on Sandyford Street.
White Fungus is a magazine and art project which began in 2004 in Wellington, New Zealand, but is currently based in Taichung City, Taiwan. White Fungus founders Ron Hanson and Mark Hanson’s Taiwanese roots stretch back to the beginning of 2000. The brothers lived in Taiwan for the first four years of the previous decade, during which time they laid the foundation for the White Fungus project. White Fungus has held interdisciplinary art events at galleries around the world, including P.P.O.W (New York), Taipei Contemporary Art Center, Artspace (Auckland) and Adam Art Gallery (Wellington). White Fungus was part of the 2012 exhibition Millennium Magazines at the Museum of Modern Art in New York. The exhibition was a survey of magazines made by contemporary artists since 2000. White Fungus will be exhibiting at the London Art Book Fair at Whitechapel Gallery, September 21-23.
Posted by Edit All Nona at 2:33 pm 0 comments